ITALIAN JEWELRY – A Heritage of Gold Craftsmanship in Valenza – Picchiotti 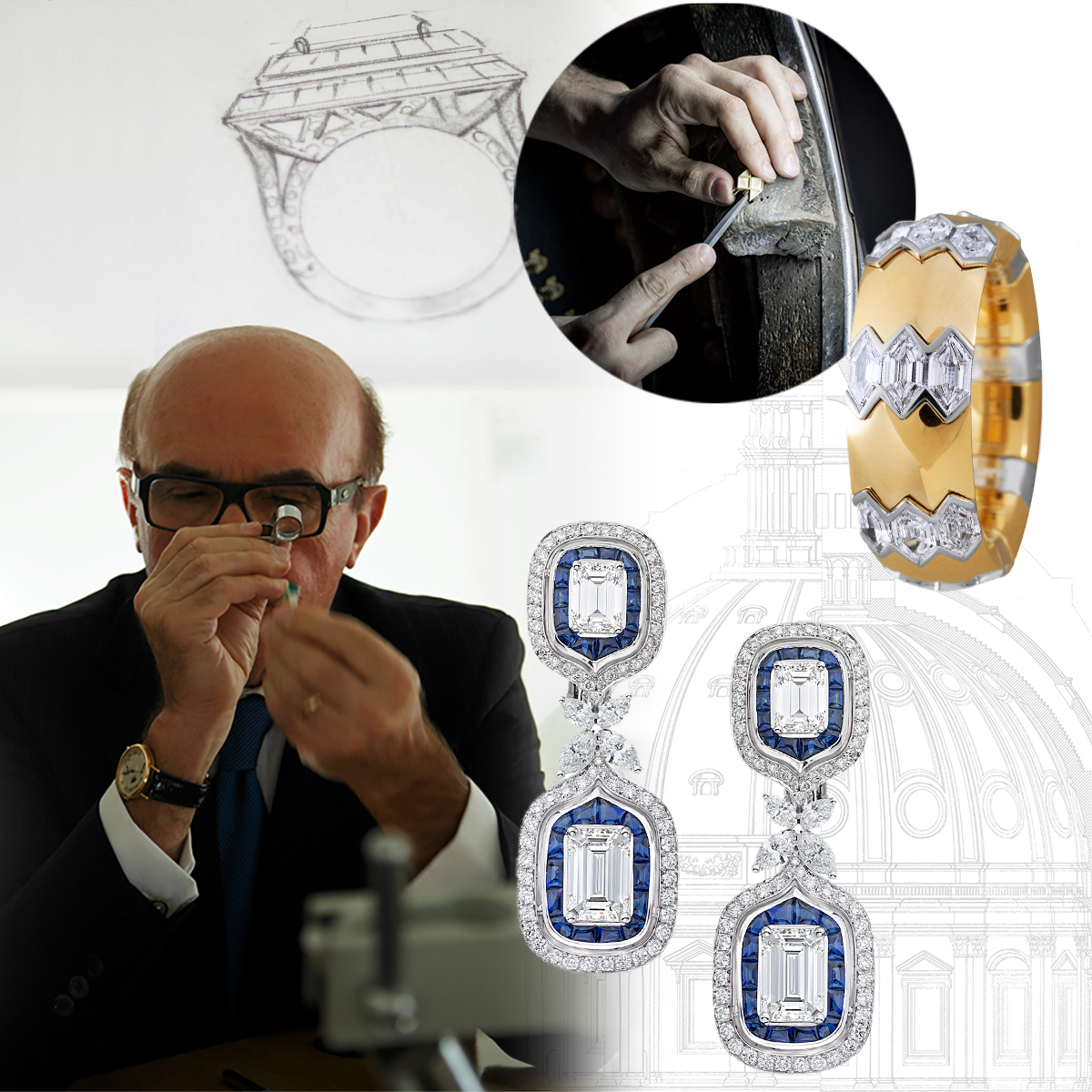 ITALIAN JEWELRY – A Heritage of Gold Craftsmanship in Valenza

ITALIAN JEWELRY – A Heritage of Gold Craftsmanship in Valenza

Long before the PICCHIOTTI brand was ever conceived, the heritage of Italian gold jewelry had been thriving for centuries. The ancient Etruscans settled in the hills of what is now northern Italy. Their exceptional gold craftsmanship was passed down for generations and continues to be treasured by connoisseurs and museums around the world. One could easily argue that modern Italians, including renowned designer Giuseppe Picchiotti, have an intimate affinity for gold jewelry coursing through their veins. The “Made in Italy” cachet for fine jewelry is literally in their history and in their DNA.

Today, one of the three primary Italian cities of gold is Valenza, the home of the PICCHIOTTI brand. Let’s take a look at how Valenza became a prominent city of Gold and at the unique hallmarks of Italian craftsmanship as evidenced by the incredible workmanship in every piece of PICCHIOTTI fine jewelry.

Valenza, a City of Gold & Gemstones 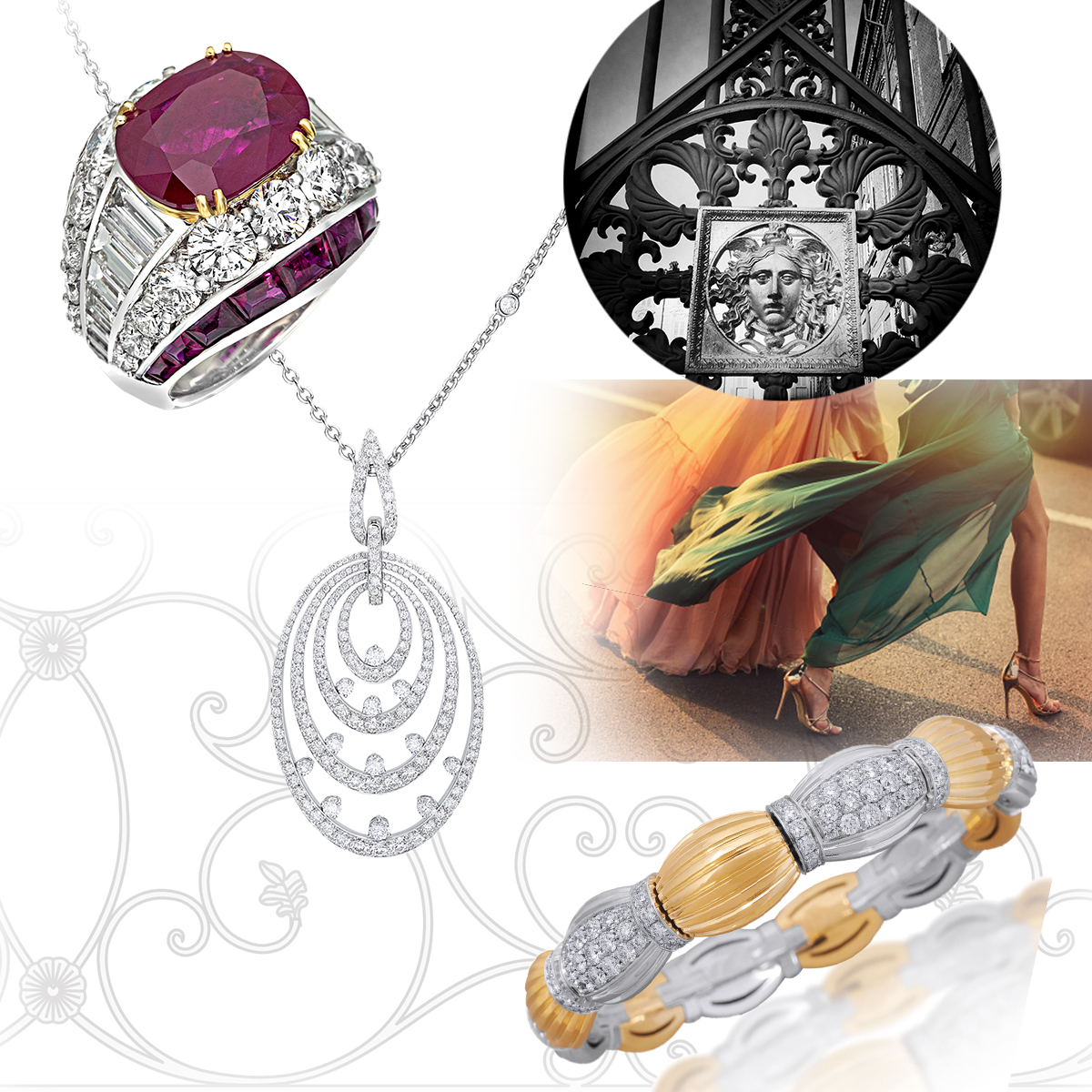 Nestled in the northwestern region of Italy known as Piemonte (Piedmont in English), the city of Valenza is a flourishing cultural hub for fine jewelry designers and manufacturers. Of the three major jewelry centers in Italy, Valenza is the one best known for fine jewelry with gemstones.

According to VO+, a prominent Italian jewelry magazine, “The Valenza goldsmithing district, where Alessandria, Turin and Asti converge, extends as far as Valenza and eight other adjoining municipalities, and also includes three municipalities in Lombardy. Unlike the other goldsmithing districts in Italy, which are focal points for industrial goldsmithing and the use of machinery, Valenza is characterized by the production of hand-crafted jewelry: exclusive, unmistakable one-off pieces made using fine techniques, meticulous attention to detail, premium-level design, and prestigious materials.”

The history of goldsmithing in the area begins with the Etruscans who settled there in the seventh century B.C. They were later absorbed into the Roman Empire in the first century B.C.  There is great evidence in Etruscans tombs of gold jewelry being worn by royalty in ancient Etruria, both men and women. I have personally worked an Etruscan archeology dig in northern Tuscany, as part of a graduate degree focused in art history, and I had the pleasure of exploring the plethora of ancient gold jewelry in the area because is still being celebrated and showcased in museums to this day.

Those Etruscan goldsmiths perfected the arts of lost wax casting, granulation, filigree, and jewelry design and produced highly prized jewels for kings and queens under the many different reigns of Italian history. During the Middle Ages, the locals continued to produce precious gold artifacts for the church and later for the wealthy landowners during the feudal period.

Esteemed jewelry historian and author Vivienne Becker explains the birth of Italy’s modern jewelry industry. “Throughout the ancient and medieval world, gold, gemstones, and jewels were the prerogative of royalty, nobility, and the church, but later, after social and industrial revolution across Europe, and the resulting rise of a wealthy merchant class, jewels became prized status symbols, sought-after by an ever-widening market. This democratization of luxury, combined with increasing industrialization of manufacture, stimulated the expansion of Italy’s small, individual artisanal workshops into a thriving jewelry industry.”

That growing demand amongst the bourgeoisie for precious gems and fine jewelry inspired a boom in manufacturing. All over Italy, new ateliers equipped for larger production began opening, and Italian jewelry craftsmanship became known worldwide for its premium quality. 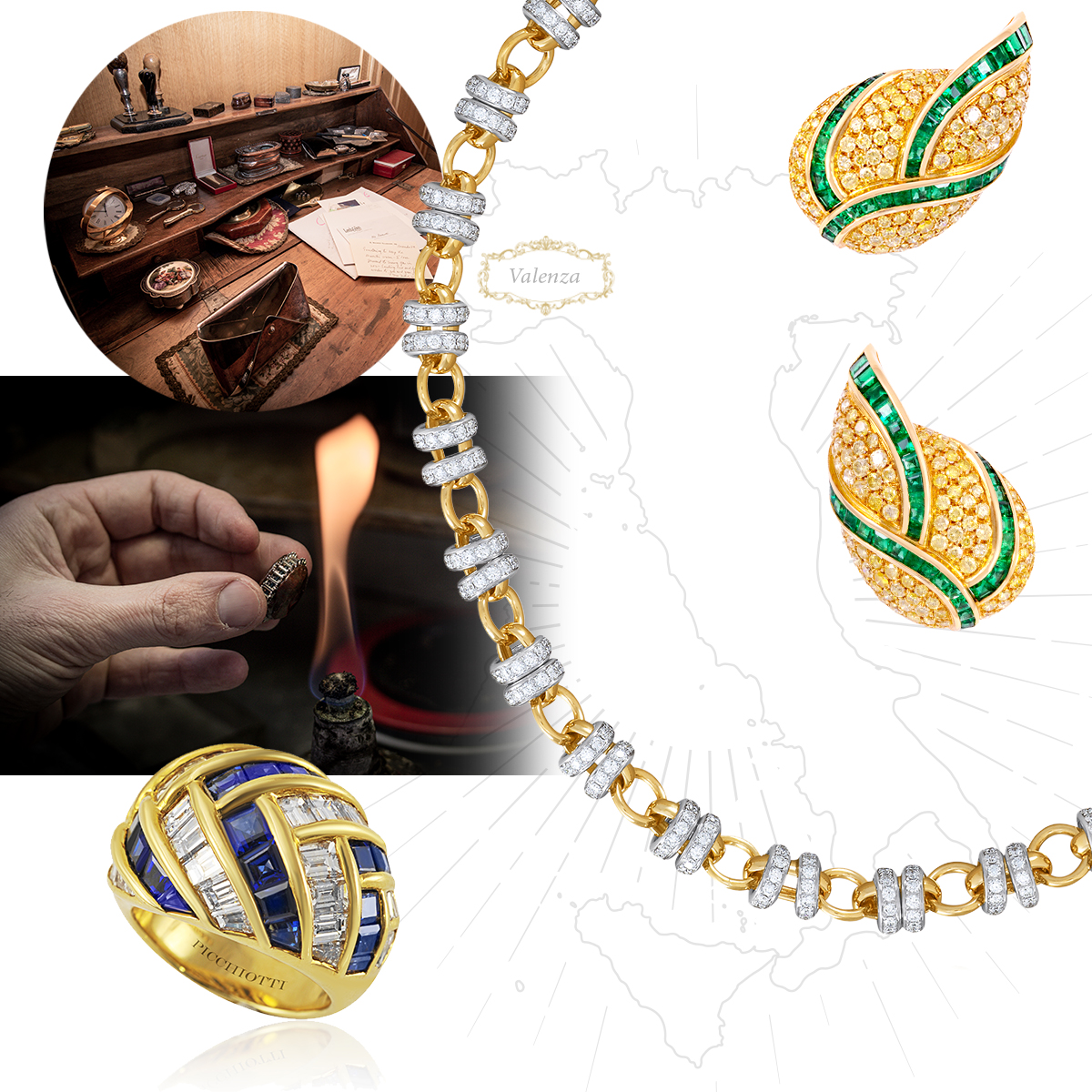 By the mid 19th Century, a jewelry designer named Vincenzo Morosetti was the first to create a jewelry workshop in the heart of the town of Valenza. A business savvy entrepreneur, Morosetti was very successful and is credited with founding the local jewelry industry in Valenza and establishing its unparalleled artisanal tradition.

One of Morosetti’s most ambitious and talented students, Vincenzo Melchiorre left to establish his own jewelry studio in nearby Turin where he stayed until 1869. Following his passion, he traveled abroad to Paris where he lived and worked. He fused his goldsmith skills with the emerging French fashion of the time. At the outset of the Franco-Prussian war, Melchiorre fled home to Valenza where he founded Melchiorre & Co, establishing a specialized jewelry production. He took advantage of enhanced trade routes along the Mediterranean to source unique gemstones from other parts of the world. He is credited for introducing the use of colored gemstones in Italian jewelry in Valenza.

Melchiorre’s jewelry became so popular, he sold it far outside of the Piemonte region. In effect, he founded the export trade that was to fuel the industry and economy of the area. His pupils and apprentices eventually started opening their own businesses, creating a proliferation of small jewelry manufacturing companies in and around Valenza.

Unlike the other centers of Italian gold jewelry production (Arezzo and Vicenza) which specialize in machine production of predominantly plain silver and gold designs, Valenza became the epicenter of fine, old-world, handcraftsmanship of exceptional diamond and colored gemstone jewelry. Importing rubies from Burma, sapphires from Ceylon, diamonds from Golconda and more, the local goldsmiths experimented, continually refining their setting techniques to improve the durability of the jewelry, exporting it across Europe and eventually to the Americas, as well.

Such jewelry firms still characterize the economic fabric of Valenza to this day. In 1850, there were 3 jewelry manufacturing companies in the province. By 1914, there were 44 with 514 workers out of 5,000 inhabitants, and in 1945, the industry had grown to roughly 300. Today, the province of Valenza still boasts over 700 highly qualified and renowned fine jewelry businesses and brands.

The Four Hallmarks of Italian Craftsmanship – The PICCHIOTTI Way 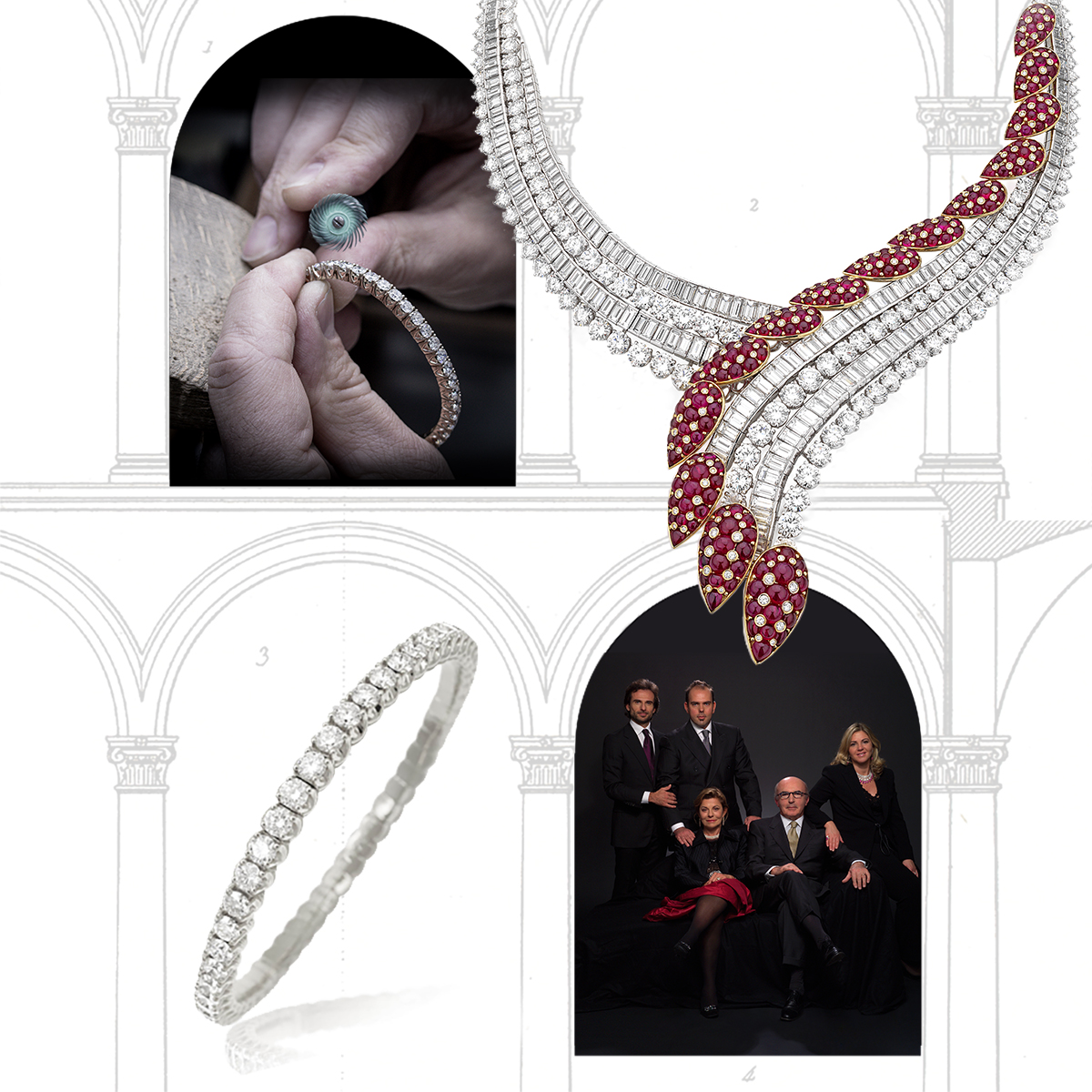 Giuseppe Picchiotti was born and raised in Valenza. Though he hailed from a family of pharmacists, Giuseppe fell in love with jewelry and precious gems at a very early age. Thriving on the artistic atmosphere, creativity, and ingenuity of his hometown, he was practically destined to become a jeweler. His father, hoping to dissuade him from working outside the family business, got him a summer job when he was just thirteen working in the atelier of the renowned Valenza jewelry school. For three years, Giuseppe toiled long hot hour summer hours, all the while absorbing and learning the craft of goldsmithing and fine jewelry design. He then became an apprentice at the esteemed Camurati & Ubertone company, jewelers to stars like Sofia Loren. He eventually graduated from the Istituto Professionale Orafo in Valenza. He recalls fondly, “I was lucky to have the best teachers, one from Budapest, one from Prague, both artists, both designers. And I had an art history teacher from Torino. As much as I hated studying pharmacology, so I loved studying jewelry, and I put all my efforts into it.”

Fatto a Mano – Made by Hand

In 1967, Giuseppe fulfilled his destiny and started the PICCHIOTTI company in the heart of Valenza.  Similar to other jewelers in the area, Giuseppe structured his company as an artisanal enterprise, focusing heavily on handcraftsmanship, quality, and design. As the business grew, thanks in large part to his business savvy and language capabilities (Mr. Picchiotti speaks five languages fluently), he surrounded himself with the very highest quality artisans – talented goldsmiths like himself and apprentices that he could train to do it by hand, his way.

In Italy, designers like Giuseppe are literally raised on the arts of antiquity, as well as High Renaissance paintings, sculpture, and architecture. They see examples daily in their familial homes, local museums, and public buildings. Each city has its own treasured artifacts, often in an archeology or art museum, heavily trafficked by school children and tourists alike. In addition, they grow up surrounded by the natural beauty of the Italian landscape and the fashion influence of heritage brands like Gucci, Valentino, and Ferragamo. Giuseppe fused all of those influences into his jewelry creations. The resulting combination of creativity and classicism in PICCHIOTTI design is, in a word, impressive.  Giuseppe always wants his jewelry collections to be pioneering and distinctive but sophisticated and relevant for our modern lifestyles.

Italian jewelry is also characterized by a touch of Italian ingenuity, and PICCHIOTTI is the classic example. The brand is known internationally for its manufacturing innovation and for adapting to the needs of consumers and jewelry connoisseurs. Their patented Xpandable™️ collection was developed specifically to solve problems from ring sizing and cumbersome bracelet clasps. Designed and crafted to be worn daily, the expanding rings and bracelets epitomize the “Made in Italy” ideals of durability, beauty, and originality.

Every piece of PICCHIOTTI jewelry is made in the atelier in Valenza, using state of the art technology and good old-fashioned handcraftsmanship. Mr. Picchiotti, his three adult children, and other family members are involved at every step of the process to ensure the very finest quality and the continuation of the brand’s esteemed reputation.

The Picchiotti family is proud of its Piemonte roots and is honored to continue to uphold the beloved heritage of Italian gold craftsmanship in Valenza. In addition to fine jewelry, Giuseppe recommends that elite travelers visit the region to discover for themselves what makes it so special. He recommends the remarkable wines of the region, especially the famous Barolo fine red wines and the intensely flavored Barbaresco varieties. The region is also known for its exceptional white truffles.

The finest restaurant and hotel in the area is Il Vigneto (The Vineyard) that is in the midst of a renovation and will reopen this spring with newly refurbished rooms and suites. The Picchiottis love it because it has the best view in the Langhe territory. According to MariaCarola Picchiotti, Giuseppe’s daughter, “Il Vigneto is truly spectacular! It sits on top of a hill where you can enjoy a 360° spectacular view of the surrounding idyllic countryside. On clear days, you can see the Alps from far away. The service is excellent, and the food is simply great, with a very strong focus on the local traditions. In the summer you can sit outdoors breathing the sweet hill breeze. This is the favorite restaurant of our family. We have celebrated many milestones and special occasions there.”

Luckily, you need not travel far to enjoy the jewelry, the wine, or the cuisine … all are distributed worldwide to luxury retailers who can help you enjoy the very best of what Valenza has to offer whenever you like. From our hometown to yours, we say “Speriamo di vederci presto!”  We hope to see you soon.

The Baguette-Cut Diamond and the Creation of a Signature Style

You don't have permission to register